Nons SL660 review: the magical film camera I fell in love with 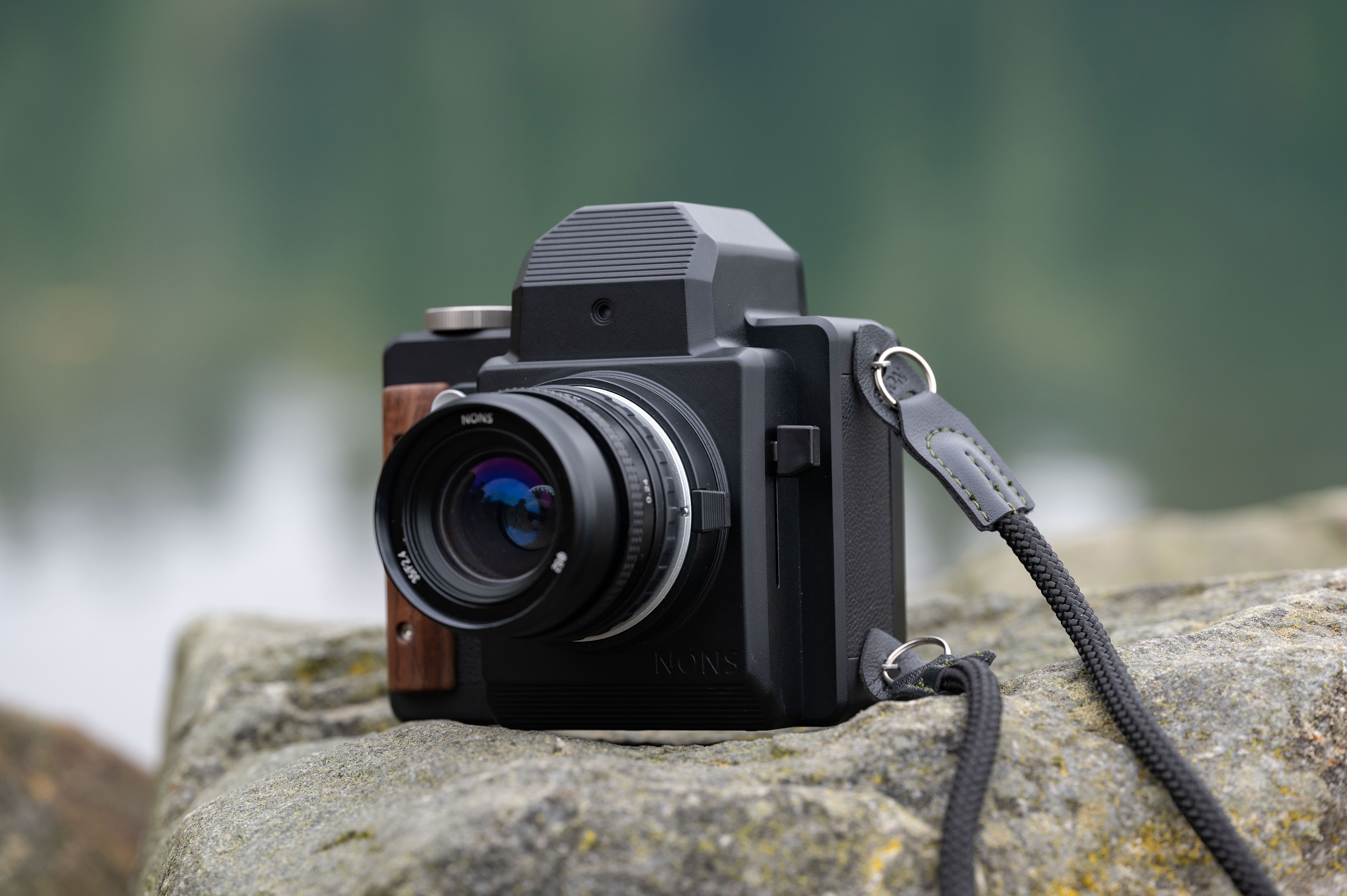 The product of a successful Kickstarter campaign, the Nons SL660 is now a reality. This unique camera offers the fun of an instax camera combined with the premium build quality and the flexibility of an interchangeable lens system.

As someone who grew up as a digital photographer, I’ve always envied the physicality of film, and have regretted that so many of my images are trapped on hard drives and memory cards. Printing at home is a headache, and ordering prints is expensive. However, if you’re shooting rolls of film, then you’ve either got to develop it yourself or send it off to be printed. That’s where instant film comes in, and it offers an alternative that combines the immediacy of digital with the physical nature of film, while sidestepping the difficulties associated with actually getting your work printed.

The SL660 is a chunky beast of a camera, but while it may be the size of a DSLR, it’s nowhere near as heavy to lug around. That’s because a film camera doesn’t need the heaps of electronics that are crammed inside your average digital camera, nor does it require a great big lithium-ion battery (though it does have a small one built-in). That’s not to say that it’s cheaply made, and in fact, it’s one of the more solidly built cameras I’ve used. The metal housing is reassuringly rugged, which is a welcome change from the plastic exteriors of many modern cameras.

The controls may seem a bit alien to those more used to digital cameras, but it’s really quite straightforward. The back hatch opens up for film cartridges to be inserted, while on the left side of the lens is the lever that engages the mirror and arms the camera to take a photo. You’ll want to wait to press this until you have identified the scene you’re going to shoot — otherwise, you may accidentally trigger the shutter. The shutter button is located to the right of the lens and operates as any camera’s shutter button would.

On top of the camera are a cold shoe mount for various accessories, the dial with which you select the shutter speed, and a tiny LCD screen. This screen displays the number of remaining shots in the film cartridge, the remaining battery capacity, and your light meter. The light meter reads the light levels in the direction you are aiming the camera and tells you what F-stop to set your lens to for the correct exposure. This camera is best used with fully manual lenses with mechanical apertures operated via a dial on the lens itself.

However, it can also be used with electronic aperture lenses by setting the aperture with the lens mounted on a digital camera before detaching and mounting the lens on the SL660. The electronic lens will retain the preset aperture after it is set using the digital camera. While this is an effective workaround, it’s certainly something of a hassle.

On the back of the SL660 are the USB-C charging port, power switch, and film eject button. Once you have snapped your shot, simply hold down the film eject button and the SL660 will spit your photo out the side, where it will take a few minutes to develop. Due to the exposed USB-C port, and the various other unsealed openings in the camera, I would not use this camera in even very light precipitation.

Grading the SL660 on image quality based on the typical metrics of sharpness and other factors that define the imaging perfection sought by modern digital cameras would be neither fair nor productive. For one thing, the imaging performance of the SL660 is dictated by the Fujifilm Instax Square film it requires. This film isn’t high resolution, has very poor dynamic range, and a rather high ISO of 800. Compounding this, the camera uses an integrated optic to boost 35mm format lenses to the larger square format film. The shutter speed also maxes out at 1/250, which is really very slow.

The upshot is that the SL660 is best used in low-contrast situations, and if you want to use wide-open aperture settings for glorious swirly bokeh, you’ll either need to shoot in dim lighting or use neutral density filters to darken the scene. Also, because of the nature of the film and the integrated lens system of the camera, don’t expect razor-sharp images out of the SL660.

Once you and the camera are in sync, its apparent challenges metamorphose into the ingredients of artistic style.

All this needs to be said and understood at the outset because the SL660 is a camera that requires you to grow intimately familiar with its quirks and foibles. Once you and the camera are in sync, its apparent challenges metamorphose into the ingredients of artistic style.

Photos captured with the SL660 tend to have a dreamy, aged quality that to me evokes a strange sense of nostalgia. There’s also something really magical about seeing an image appear on paper in the moment after you’ve captured it. I also find that capturing a digital photo of the Instax print with the location of the shot in the out-of-focus background makes for a very compelling subject for sharing on social media.

Mechanically, I never had any reason to complain about the SL660. Its various controls are very tactile and easy to operate, and I find the sounds caused by the process of shooting photos to be extremely satisfying. A minor issue for me is that the built-in light meter seems a little unreliable, though that’s most likely due to my inexperience with light meters. I find the best strategy is to aim the camera at various points throughout the scene I intend to shoot, which helps me determine which settings will deliver the optimum results. I also had trouble achieving accurate focus due to the somewhat small size of the viewfinder.

In regard to battery life, I received the camera partly charged, and didn’t bother to charge it before shooting. As of this writing, I have shot around 30 images, and have mistakenly left the camera turned on several times. Thankfully, it shuts off automatically after 10 minutes, and the battery has not noticeably depleted. Depending on how much you shoot, your experience may vary, but based on how I’ve been using the camera, I would be surprised if I needed to charge it once every three months.

Starting at $600, the SL660 isn’t cheap. If you want a lens, the 50mm f/1.8 costs $50, while the 35mm f/2.4 will set you back $110. For a similar price, you could pick up an extremely capable modern digital camera and capture more detailed images. Alternatively, you could get a Fujifilm Instax Mini Evo camera for just $200, which can capture digital photos and act as a wireless Instax printer in addition to capturing Instax film images. However, the SL660 provides an experience that digital can’t replicate, and it’s a much higher-quality option with greater versatility than inexpensive Instax cameras.

Alternatively, Instax backs are available for adapting professional medium format cameras to shoot with instant film. This will deliver higher-quality images and a better shooting experience than the SL660, but there you’re looking at spending hundreds of dollars for the back, body, and lens, potentially landing you well over $1,000. The biggest downside of the SL660 is that the Instax Square film it requires costs $20 for a pack of two cartridges with 10 shots each. That means every time you click the shutter, you’re spending $1, and that’s particularly painful when you’re learning to use the camera and are making a lot of mistakes.

Testing the Nons SL660 has been an incredible experience. It has opened my eyes to the joys of shooting with film, and to having physical copies of the images I capture. When I take a photo with one of my digital cameras, there is little incentive to think before I shoot, and after I download the images to my computer, I may never look at them again. The SL660 slows me down and forces me to compose each shot meticulously. With the final images printed out, I find myself frequently flipping back through them and enjoying them immensely.

This is a camera for creating art and capturing lasting memories outside of the prison of a computer hard drive. Even for a photographer such as I am, normally shooting with the Nikon Z9 and other cutting-edge camera gear, the SL660 deserves a special place in my kit for moments I really want to savor. It’s not perfect by any means, but those flaws count more as character than cons. The only really unfortunate aspect of this camera is that the film it requires is so expensive, but that’s beyond the control of Nons.

If you love photography and are looking for an exciting new experience to inspire you and help you hone your skills, then the Nons SL660 is what you’re looking for.