It’s officially Cyber Monday, and if you’ve stayed up until midnight to see the deals, it’s time to reap your rewards. We’re seeing Cyber Monday tablets deals from all major tech dealers. There’s a great variety for them too, from cheaper tablets like the Amazon Fire, to high end, premium devices like the newest Apple iPad. This might be your last chance to grab crazy Cyber Monday deals, so put the best device you can find in your shopping cart and click “checkout” before the sales event is over.

If you want what’s arguably the cheapest tablet that’s still worth your money, you want a Fire tablet. The Amazon Fire 7 is the cheapest of Amazon’s cheap tablets. It’s not going to set the world on fire in terms of performance or display quality, but it gives you easy access to tons of apps, you can watch videos and browse the web on it, and — of course — it’s fine for reading books and magazines. It’s not a bad little device to consider getting if you have a Prime account, as it’ll let you take full advantage of your membership benefits. If you can up your budget just a bit, though, then the Fire HD 8 might be a better buy.

If the Fire HD 8 is a little too small, then look to its slightly larger cousin: the Fire HD 10. A 10.1-inch screen means there’s a lot more to see here, and those two extra inches make a noticeable difference in usability. It’s the perfect smart home control center if you use Amazon’s Alexa a lot, and the faster processor should mean it’ll handle games better than its smaller siblings. There’s also a split-screen mode in FireOS now, so you can actually take advantage of the larger display. It’s not going to be the equal of something like an iPad or Galaxy Tab, but if your needs are modest and the lack of Google’s Play Store doesn’t bother you, then this is probably the best of the Cyber Monday tablet deals you can get for less than $100. 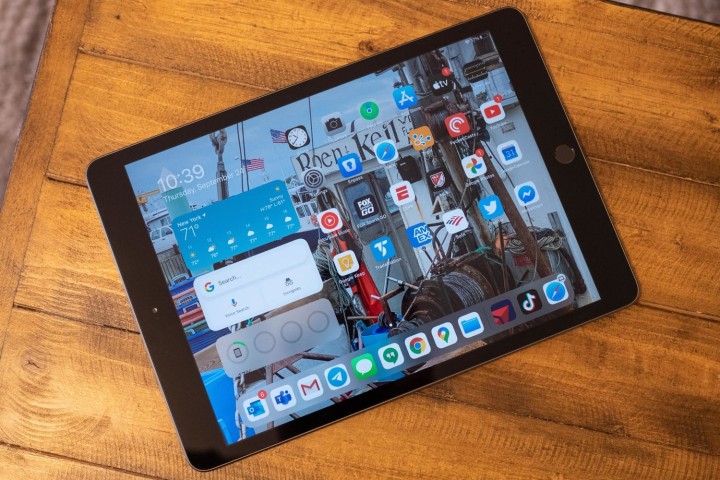 The iPad is still the king of tablets, and while it’s not one of the brand’s high-end models (or even the newest), the 2021 Apple iPad is the tablet to buy if you don’t want to spend more than $300. This is the last-gen model, sporting a 10.2-inch display with larger bezels than we’d like, but the performance is great, it’s a good size for an everyday tablet, and the price is right. This 9th-gen model saw some nice upgrades from the previous generation, with its base storage being boosted to 64GB and the front-facing camera getting a complete overhaul. If you want an Apple tablet for less than $300, Cyber Monday iPad deals don’t get any better than this.

It’s almost criminal how overlooked the iPad Mini is. Apple’s compact tablet is really a fantastic little device, and the Apple iPad Mini 2021 punches well above its weight in regard to performance. With an 8.3-inch display (a slight but noticeable increase over previous models), it’s big enough for most things you want to do on a tablet, while still being small enough to be easily portable. Its A15 Bionic chipset provides plenty of muscle for running apps and mobile games, and the speakers are also surprisingly good, making this iPad a capable on-the-go multimedia device.

The Microsoft Surface Pro 7+ is a fine tablet, and one that can serve as a handy 2-in-1 laptop with its excellent 12.3-inch PixelSense touchscreen and solid PC hardware. This one’s equipped with an 11th-generation Intel Core i3 processor, 8GB of RAM, and a 128GB SSD. As a two-in-one device, it quickly transforms into a laptop with the included Type Cover keyboard that also protects the tablet’s display when folded up. The two-in-one device is just 7mm thin, so it’s easy to carry with you when you’re on the go, and Microsoft promises up to 13 hours of battery life on a single charge. The Microsoft Surface Pro 7 also comes with a pair of USB-C ports, so you can connect it to accessories such as displays and docking stations while also charging your other devices.

In our in-depth review, we stated that the Samsung Galaxy Tab S8+ is the best Android tablet for the money. That should come as no huge surprise, considering that this tablet comes from the top Android smartphone brand. It sports a lovely 12.4-inch display with great speakers, making this a fine tablet for entertainment, but its powerful hardware also makes it a portable powerhouse for work and creativity. It includes the S Pen stylus too, which saves you the additional expense of having to buy it separately, and with 256GB of onboard storage, you’ve got plenty of room for your apps and file library.

Want to go a bit bigger? Perhaps you plan to put your tablet through its paces as a laptop. In that case, it’s worth sizing up to the 12.9-inch iPad Pro, which was updated in 2022 alongside the 11-inch model. With the powerful M2 chip and 128GB of storage, you’re good to go for just about any task you’d need to do on a tablet or even a MacBook, while still having all the portability and versatility that you get with a tablet. The 12.9-inch 2732 x 2048 Retina display looks gorgeous no matter what you’re doing, be it work or entertainment, and the M2 chip’s 10 graphical processing cores mean this thing can effortlessly handle mobile games, too. Whatever you need a tablet to do, the 12.9-inch iPad Pro can do it, and then some.

The liveblog has ended.

No liveblog updates yet.